These interesting facts about ice cream might seem trivial to some. But to anyone who loves this delicious treat as much as I do, they’re important.

One of the things I like about it is how many different ways you can eat it. If you’re mobile and want to take your sweet treat with you, have an ice cream cone. Then you need to decide whether you want a cake cone, sugar cone, or waffle cone.

Another thing we enjoy about ice cream is that it’s perfect for any special occasion. Enjoy it at a birthday party at home or celebrate an event at an ice cream parlor.

Ice cream is always one of the most essential desserts I purchase from the store, but I also enjoy making it. After discovering no-churn recipes, I ditched my electric ice cream maker.

The basic ice cream recipe I use is the same, but the add-ons make the difference with the flavors.

Here are some of my favorite homemade ice cream flavors:

Mint Chocolate Chip Ice Cream – Actually, this is the first one I made, and it came out perfect the first time I made it.

Strawberry Ice Cream – This is the perfect treat to make with either fresh or frozen strawberries.

Cinnamon Pecan Ice Cream – This ice cream the same delicious blend of flavors you get from eating pecan pie with vanilla ice cream on top.

1. In order to create one gallon of ice cream, you need 12 gallons of milk.

2. Cold ice cream hitting the roof of your mouth causes brain freeze, which in turn causes blood vessels in your head to dilate. If you’ve ever had an ice cream headache, you know how quickly it hits. Fortunately, it doesn’t last long.

3. The most popular ice cream topping for vanilla ice cream in the U.S. is hot fudge, followed by sprinkles, caramel, Oreos, and peanut butter cups. A dollop of whipped cream is a favorite finishing touch.

5. Boston was the first place ice cream was industrially produced in the United States in 1851.

7. More than 21 billion dollars worth of ice cream is sold in the United States each year.

8. California is the largest producer of ice cream in the United States.

11. During prohibition, many distilleries in the U.S. switched to making ice cream, and consumption of the frozen treat increased substantially.

13. Each year, Ben & Jerry’s sells about 500 million dollars worth of ice cream throughout the entire world.

15. Not surprisingly, ice cream sales shot up during the Covid pandemic, with dozens of new flavors and hybrid flavors hitting the market.

17. According to Fortune Business Insights, the world market for ice cream reached 70.85 billion dollars in 2019.

18. Billy Moll, Howard Johnson, and Robert King wrote a song about ice cream with the phrase, “I scream, you scream, we all scream for ice cream” in 1927. The phrase caught on, and we still say it to this day.

19. In 1920, Harry Burt was the first person to have ice cream trucks on the street.

20. An ice cream vendor is someone who sells ice cream in shops, from trucks, or door-to-door.

24. Texas holds the world record for the longest ice cream sundae ever created.

25. During World War II, the U.S. made sure the military troops had plenty of ice cream. One of the main reasons was that it lifted morale among the troops.

26. A favorite way to enjoy cakes, pies, and cookies is “a la mode.” In the U.S., this usually means with ice cream on top. If you haven’t tried this mini skillet chocolate chip cookie a la mode, what are you waiting for? It’s delicious!

27. No one knows for sure when the first ice cream cake was made. However, there is speculation that it was created in England in the 1700s.

28. What is now called “low fat” ice cream was once referred to as “ice milk.” It has a lower fat content and is usually much lower in calories.

There are more ways to eat ice cream than there are days in a year. My absolute favorite way is a couple of scoops in a bowl, either with or without a topping.

It’s also good perched on top of a mug cake … especially if it’s chocolate. I also like it on this peanut butter mug cake.

Crumble your favorite candy over ice cream for a delightfully delicious treat. I like it with this chocolate peanut butter moose munch. 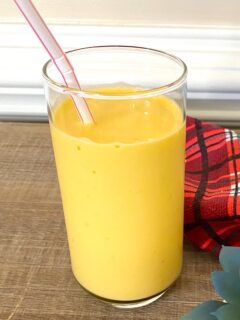 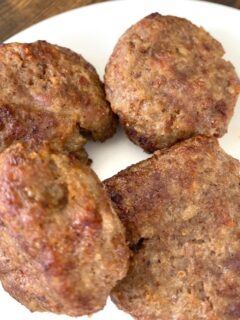